New hotel by MDM soon to rise at downtown Miami 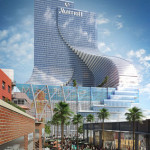 MDM is now planning for a hotel and convention center in downtown Miami. The same developers have started construction on a garage with a ground floor site for Whole Foods.

The news from Miami Herald reported that the MDM Group is slated to purchase the site of the former Miami Arena. The developers plan on building a 1,800-room Marriott hotel with a 1,500 square feet theater, a 2,300-space garage, and a 500,000 square feet convention space.

The plan would connect to the All Aboard Florida passenger rail station just south of the site, according to architect John Nichols. The $1 billion-dollar project from MDM Group is projected to top off within four years.

According to Nichols, MDM plans to pay the development project with private money. However, since the future hotel is located on the Overtown/Park West Community Redevelopment Agency district, the project is seeing possible funds for improvements in the infrastructure from the same district.

The neighborhood is seeing a lot of renewed interest from developers. Several new condominium projects are now planned for Biscayne Boulevard and those old ones are now being brought back to life.

The news of MDM Group’s plan for a hotel could align with a billion-dollar convention center project in Miami Beach. The soon-to-be-approved development would realize an 800-room hotel, commercial and several improvements in the area.