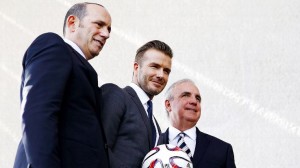 MLS Franchise can be housed in Miami, they state that their focus is finding a new site for a new stadium in the county. , The

while the search for a permanent home for an MLS team in Miami continues.

There has been a negotiation that Florida International University is a possibility for a venue, to use the school’s football

stadium. Mayor Carlos Gimenez or someone that represents him will be directed on a resolution that the County

Commission will vote on Tuesday.

c2) and Jose “Pepe” Diaz (District 12). If passed, the resolution would give Mayor Gimenez 90 days to

negotiate with FIU for a deal. The focus remans on finding a new site for a new stadium, a spokesman

for both MLS and Miami Beckham United indicated.

A spokesman for Miami Beckham United said via email that “Things are progressing in Miami, and we

are very much on track in our plans,” also added that “David Beckham is very positive about the future

of the club, and he continues to enjoy incredible support from the people in Miami. Right now, our focus

is on identifying the location for a purpose-built stadium that will be the team’s permanent home.

Careful consideration will be given to FIU when we address the opportunities for a temporary facility.”

A mayoral spokesman said via email that “The mayor is evaluating the possibility of having Mr.

Beckham’s franchise begin play at FIU,” also said that “However, [Beckham’s] organization has not

indicated a desire to see this arrangement be made, at least not to Mayor Gimenez.”

the way forward for Beckham’s group. “It makes it easier to sell a known product,” Zapata told the

Herald. “And it doesn’t look good for us to not be proactive. Until we figure out a stadium plan, I think

we’ve got to get a team on the field.”

Beckham recently said on an interview on E! Online that they “We’re pretty close to announcing certain

things and then the stadium will come after that,” Beckham said. “You can’t build a stadium overnight,

together pretty quickly and everything will start happening pretty soon.” It is just a matter of time till an

MLS Franchise kicksoff in the Miami-Dade County and the prospects of it is really high.